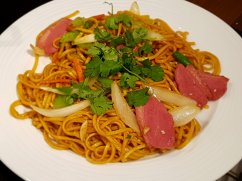 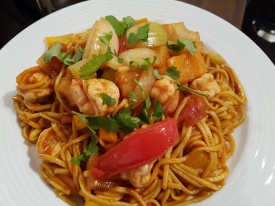 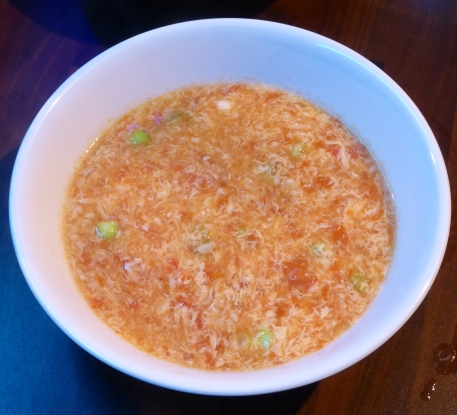 This is essentially soup and sandwiches – comfort food, Mexican style.

The soup is flavoured with four different chillies – Ancho, Guajillo, Chipotle and red chillies. The soup is rich, Smokey and very delicious with its flavour coming from a wonderful paste made from pan roasting the chillies along with tomatoes bell peppers, garlic, onions and spices.  Charring these in a pan before blending makes such a difference and really brings the flavours to life. Diced carrot and celery are fried, stock is added, then the paste followed by a good simmer. Before serving diced bell peppers, more sliced red chillies, diced onion and some fresh coriander leaf are added to give the soup texture and freshness.

The Quesadillas are the perfect accompaniment and very easy to make – just don’t tell anyone how easy! They can be made in minutes, and eaten even quicker. 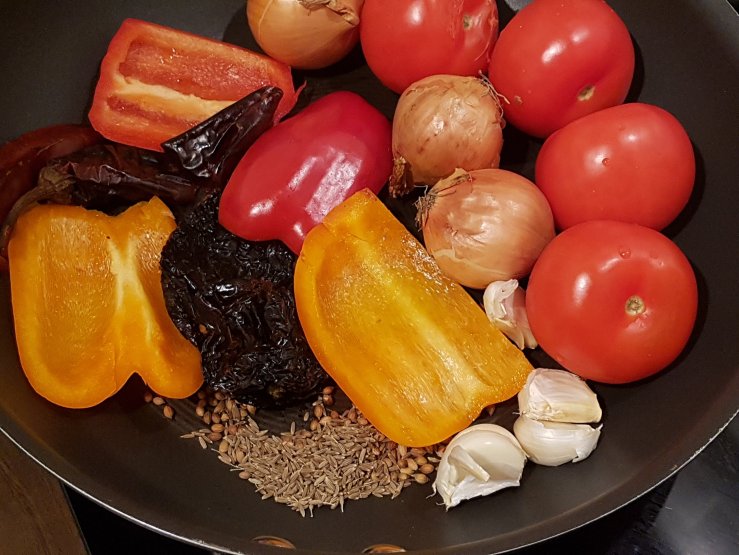 For the Mexican Chilli Soup

2 red chillies – thinly slice one chilli, Set aside in a bowl

1 orange bell pepper – dice half the pepper, set aside in a bowl

1 red bell pepper – dice half the pepper, set aside in a bowl

Method: Start by warming a large flat pan or griddle over a medium heat. Place the tomatoes, garlic, the chillies, half the bell peppers and onions on and dry fry until they become slightly charred, for approx. 7-8 minutes, turning halfway through. Add the coriander seeds, cumin seeds and dry fry until the spices become aromatic.

Remove the contents from the pan, add the spices to a food processor and leave the rest on a chopping board to cool for a few minutes. Once cooled remove the skins from the garlic and onions, but leave the skins on the peppers and tomatoes. Add everything to the food processor along with a few coriander stalks,  1 tsp smoked paprika, 2 tsp chipotle paste, 1 tsp salt, 1/2 tsp oregano and 4 tsp brown sugar. Blitz until a smooth paste is formed, make sure you blend it well as the smoother the paste the smoother the final soup.

Add 1-2 tbsp. of olive oil to a deep soup pan over a medium heat, once hot add the diced carrot and celery and fry for 4-5 minutes until softened. Next add the chicken stock, bring to the boil and simmer for 2-3 minutes. Now add the paste and stir well, bring back to the boil then reduce to a simmer for 10-15 minutes.

Complete the soup by adding the diced bell peppers, onion and sliced chilli then simmer for a further 5 minutes – enough to heat these through but not so long that they loose their texture. As a final step add the chopped coriander and stir through. The soup is now ready to serve.

For the cheese Quesadillas

Canola oil – in a spray or ramekin with pastry brush

Method: Begin by pre heating your oven to 170°c, and warm a flat frying pan over a medium heat.

Spray one side of the corn tortillas with canola oil then heat the tortilla on that side until golden, remove and repeat with the rest of the tortillas.

Assemble the quesadillas by spooning the mixture on the non cooked side of the tortillas then like a sandwich place another tortilla on top. Place the assembled quesadillas on a baking tray and heat them through in the oven for approx. 15 minutes, until the cheese in the mixture melts – this could be slightly quicker or slower depending upon how big the tortillas are and how much filling you have added.

Remove them from the oven, let them cool slightly then cut into quarters. As an optional garnish drizzle some garlic mayonnaise and some barbeque sauce  over them.

Please view my other recipes 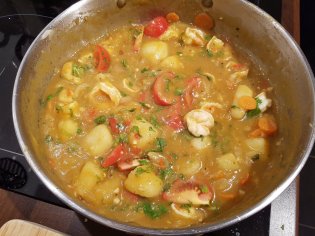 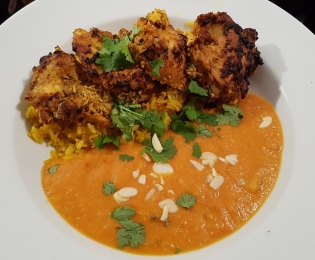 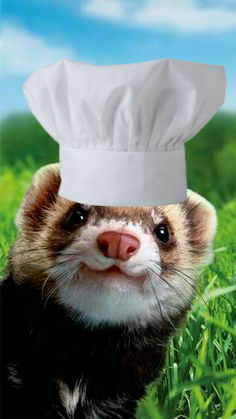 A wonderfully spiced and authentic tasting lentil curry with carrot and potatoes. Served with Basmati rice and a delicious cucumber and mint riata.

Sorry I haven’t written many recipes lately as I have been extremely busy, however I think I have made up for the delay with this one. Tastes like it is straight from a very good Indian restaurant, and it is so easy to make!

I also served this with shop bough roti breads, these are entirely optional. 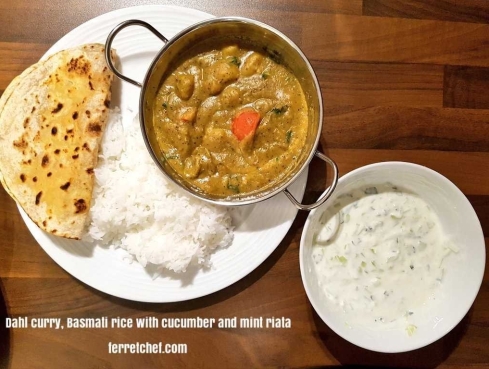 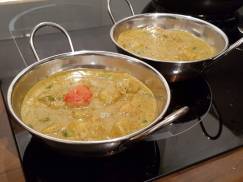 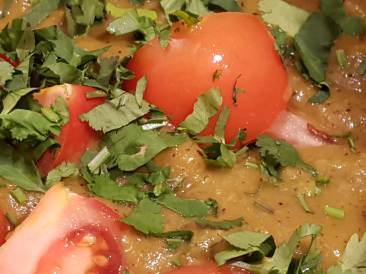 Broken down into three sections – curry, rice and riata. It is best to soak the rice before you start, add make the riata and finish the rice as the lentils simmer.

Method: Start by heating the vegetable oil over a medium heat, once hot add the mustard seeds, cumin seeds and the curry leaves. The leaves should sizzle and keep heating until the mustard seeds start to pop, a bit like popcorn.

Now add approx. 500ml of water (around the same volume as mixture in the pan, enough to submerge the lentils) and bring to the boil, stirring frequently so lentils don’t catch on the pan. Once boiled and add the pre cooked potatoes, carrot and salt then cover pan and simmer for around 35-40 minutes, stirring every few minutes to prevent lentils catching and burning.

You may want to adjust the seasoning or thickness of the sauce to your preference, either by adding more water or cooking uncovered for a few minutes to cook the liquid off. Before serving add the sliced tomatoes and coriander – cooking just long enough to warm the tomatoes through but not long enough to cook them (not long enough that skins start to peel).

Ladle into bowls or Balti dishes and enjoy!

Method: soak the rinsed rice in water for around 30 minutes, this plumps up the rice and makes a real difference.

Once soaked cook the rice in the same volume of water as the rice in a covered pan for 10-12 minutes or until rice absorbs all the water.

Fluff up the rice before serving.

Method: start by peeling, deseeding then finely dicing the cucumber. Many recipes will call for this to be grated, however I prefer the texture of the diced cucumber. Lay the diced cucumber on a clean kitchen towel or absorbent paper and the place more on top. Press gently and leave for 10-15 minutes to remove excess liquid.

In a bowl mix the yogurt, lime juice, cucumber, mint and a pinch of salt. Cover and set aside in the fridge until ready to serve.

This is best eaten the same day but will keep in the fridge for 1-2 days – any leftovers make a great dip for chips.

I would just like to wish everyone a very merry Christmas, and thank everyone who has visited my recipe blog over the last year.

I hope everyone has a happy Christmas, but also spare some thought for those less fortunate, please consider making a small donation to a charity.

I have some recipes included below that will help you make some delicious meals from your left over turkey, from curries to soups – lots of ideas to make your Christmas as delicious as possible. 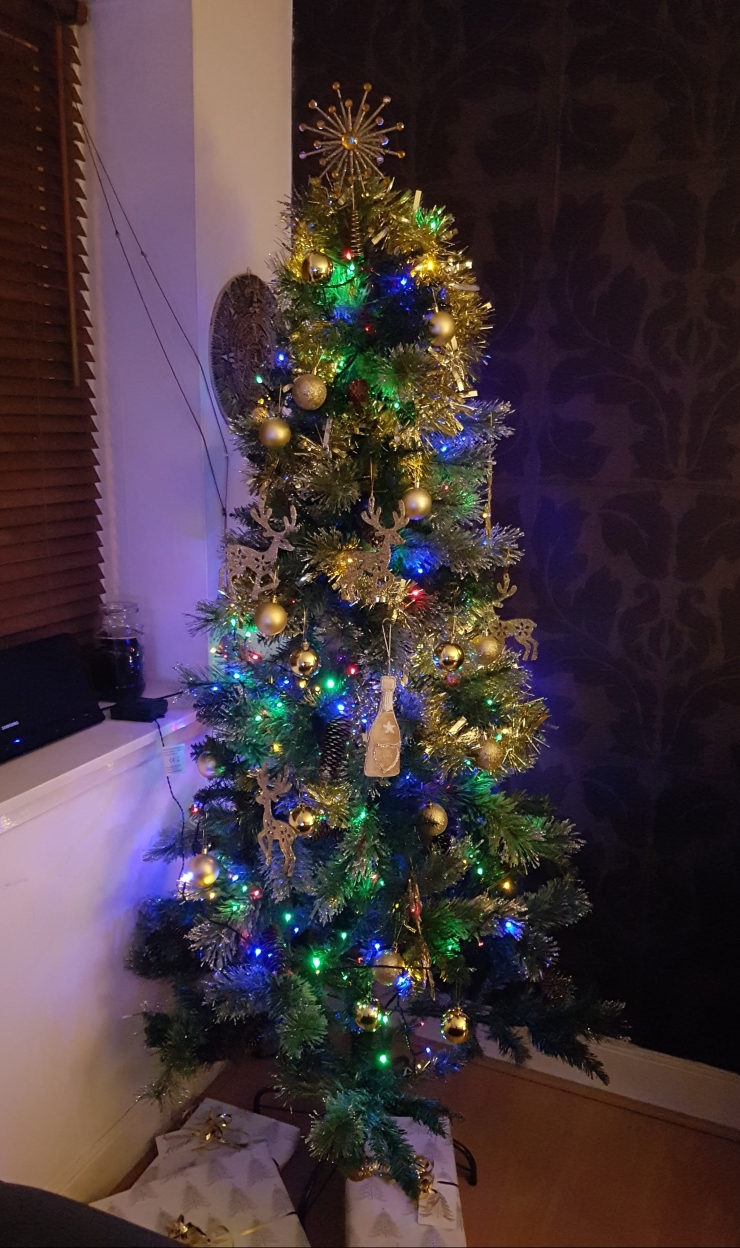 I always have a Prawn cocktail as a Christmas starter, as it is easy to prepare and quick to assemble before serving. The cocktail sauce is based upon a recipe created by my dad and just says “Christmas” to me.

In terms of cooking your turkey, I have my own method and have a few tips for you. Preparation is everything, I always do my preparation on Christmas eve as Christmas day is always quite busy.

I make a mixture of butter, parsley, garlic and a seasoning, then carefully lift the skin off the bird at both ends by sliding my fingers between the meat and skin – taking care not to rip the skin. I then put as much of the butter mixture as I can under the skin to flavour and moisten the meat as it cooks.

My stuffing is a mixture of sausage meat, finely diced onion, parsley, sage, egg, breadcrumbs and seasoning – all well mixed together. I stuff the neck end of the bird and then use cocktail sticks or string to tie the neck closed.

In the main cavity I stuff the turkey with half a lemon, a bulb of garlic, a onion, a carrot, a bay leaf and a stick of celery. Once the Turkey is placed on the roasting tin I add some more onion, garlic, carrot, lemon, celery, a glass of white wine and some Christmas herbs (sage, parsley, rosemary and thyme) round the bird to help flavour it and its juices.

I then rub some more of the butter mixture on the outside of the turkey, then drizzle the turkey with generous seasoning, honey, then layer streaky bacon over the top. The turkey is then covered in a foil tent, which is kept on during most of the cooking time – remove it for the last 20-25 minutes, during which baste the turkey frequently.

In terms of cooking time, these are a guide – always check juices run clear (or use thermometer) before resting the turkey.

I find this method to be full proof, and guaranteed to give you flavoursome moist turkey meat.

For gravy, I collect the roasting juices and cook with a splash of white wine, a little red current jelly and a little cornflour to thicken it.

For sides, I par boil potatoes then roast them at a high temperature in duck fat with some rosemary. I also love honey glazed carrots and parsnips roasted in duck fat with a little thyme. Along with the mandatory pigs in blankets.

The recipes below are all suitable for making great tasting meals from leftover turkey, simply add the cooked turkey meat towards the end of cooking and heat it through thoroughly before serving. Personally I find strong Asian flavours to be a great accompaniment to leftover turkey.

Please email me at theferretchef@gmail.com if you have any questions.

Boil the turkey bones in a deep pan of water along with some carrots, onions, leeks, celery, bay leaf, peas, salt and some black peppercorns – boil for 20 minutes then cover and reduce to a simmer for at least 3-4 hours.

Make sure you use plenty of water relative to the turkey as the stock can be very strongly flavoured. For example I will be using just over 2L for a medium sized turkey.

Please check out my soups menu for recipe ideas, personally I think turkey stock is best used in tomato or vegetable based soups.

Once again have a very merry Christmas!

Menu Page for my soup recipes 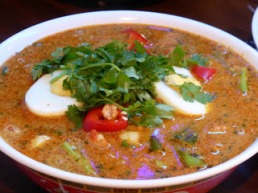 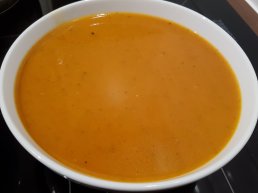 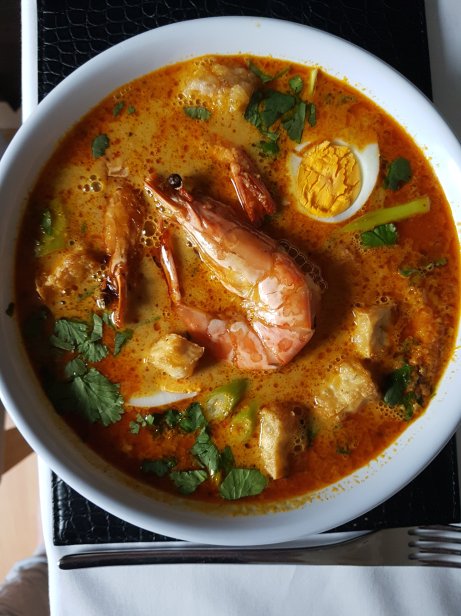